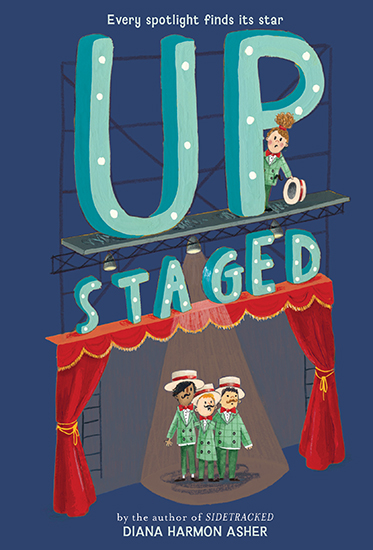 Amulet Books, an imprint of ABRAMS

Shira Gordon is painfully shy. She rarely speaks and blushes at everything. And yet, when she’s alone in her room, she’ll sing and dance, dreaming she were different. So when her best friend forces her to audition for their school’s production of The Music Man, she’s mostly hoping the play will get canceled. . . but a tiny part of her hopes she’ll get in.

And she does. As a member of the barbershop quartet. Playing a dude with a mustache is not exactly her dream role, but Shira is surprised by how much she loves rehearsing with her quirky new friends. When her teacher asks her to understudy the lead role, Marian the Librarian, she reluctantly accepts.

It’s not easy to understudy Monica Manley, an eighth-grade diva who will not be upstaged. And things get even more complicated when a mysterious prankster starts playing tricks on Monica and Shira’s crush joins the cast. But something keeps Shira going, and it might just be Marian herself. Sure, Marian is a leading lady, but she’s also misunderstood, lonely . . . and shy. And if a star can be shy, then maybe, just maybe, a shy person can be a star. 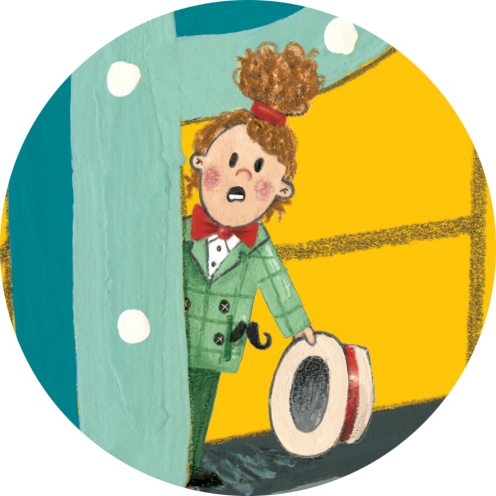 “Effectively capturing Monica’s insufferable egotism, Asher contrasts it with Shira’s inevitable moments of self-doubt and her gradually increasing confidence. Readers who participate in chorus or theater will appreciate the articulate portrayal of the work, the tension, the camaraderie, and the occasional magic of those experiences. A lively story with a satisfying conclusion.”
—Booklist

“The plot is buoyed by the energy and sincerity of the characters. Notably, Shira’s shyness is not portrayed as a flaw but as a hurdle the circumstances she’s thrust into force her to overcome… A sincerely moving story with a whole lotta heart.”
—Kirkus (read more)

Praise from other authors

“As Upstaged shows so brilliantly, even the blaring of seventy-six trombones is not as glorious as the unfolding of a soul out into the world.”
—Gary Schmidt, Printz Honor winner and two-time Newbery Honor winner

“Warm, funny, and heartfelt, Upstaged will resonate with every young person who ever doubted their own abilities, sang in a school musical, or stood up for a friend. Shira and her wonderful, quirky, talented group of friends will stay with you long after you turn the last page.”
—Barbara Carroll Roberts, author of Nicki on the Line